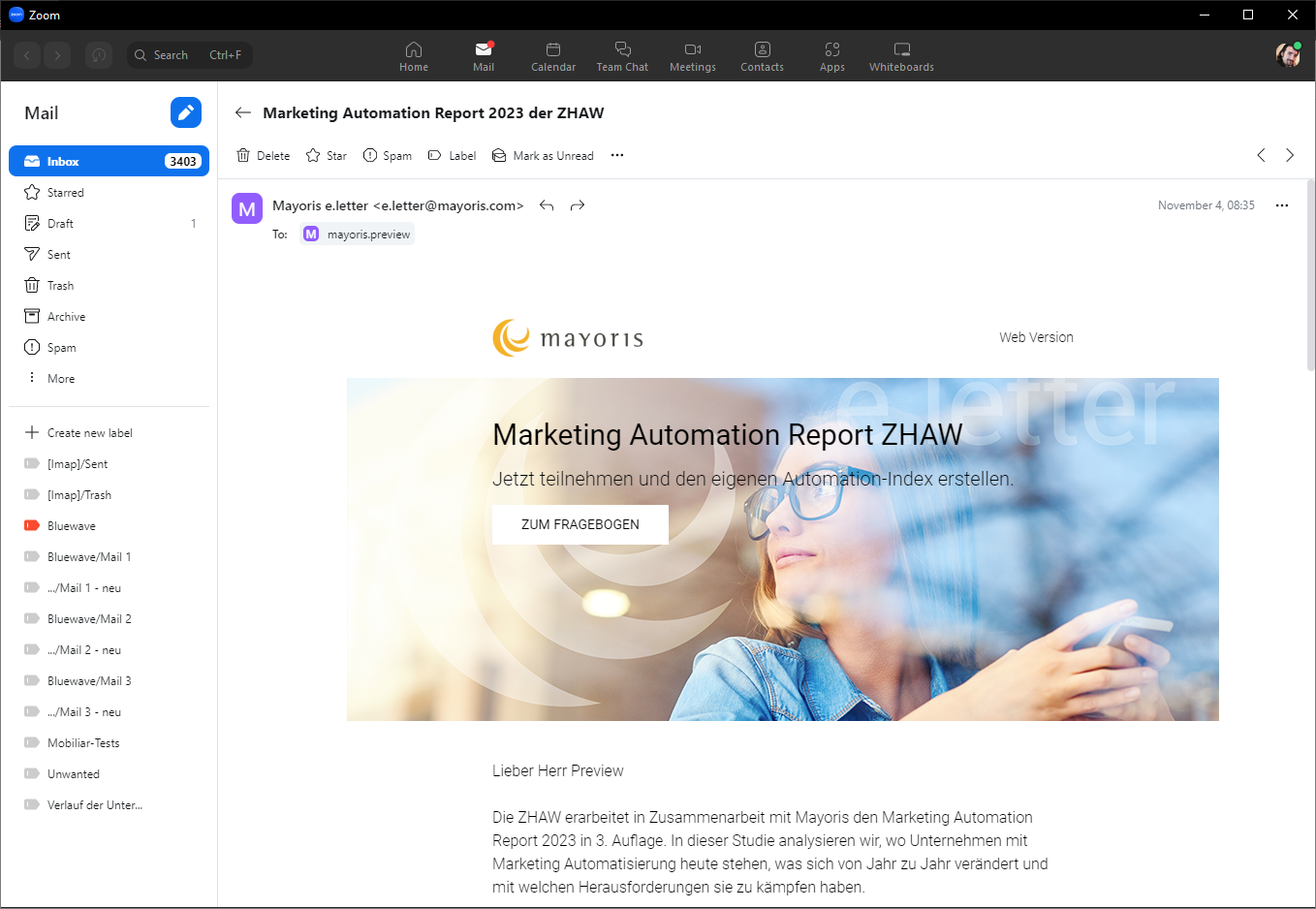 Zoom, well known for it’s video conferencing and meeting platform (more than 300% growth during the past corona years), takes steps to expand it’s signature tool into a larger communication platform. It has just launched an all new email and calendar client as part of the Zoom app.
More details here.

We have already tested it and are happy to share our first impressions.

You may need to update your Zoom App first to be able to start. According to Zooms support page, version 5.12.8 or higher for Windows/Max is required.

As of now, the Zoom email client is not available as part of the mobile App, neither iOS nor Android.

Zoom does only support GMail, Microsoft Exchange and Office365 and it’s own, new Zoom Email Service. The latter is only available for paid plans (Zoom One Pro or Standard Pro, Zoom One Business, or Zoom One Enterprise).

Connecting GMail is quite straight forward. Add your email address and grant access through the Google authenticator or another TFA option.

The sync with GMail works really fast, basic folders and labels are synchrnized automatically. However, you will receive all emails in the inbox. Messages sorted into the “Commercials” tab in GMail will appear in the main inbox in Zoom.

At a first glance, connecting an Office365 account seems as straight forward as with GMail. However, after logging in and confirming the TFA request, Office365 asks for Admin Approval. Checking back with our Office365 admin and the Zoom chatbot pointed us to the SSO integration documentation which requires a bit more review on our end, so we could not yet test the Office365 integration.

Email Rendering is on a very good level. Traditional nested table code is rendered as solid as semantic tags with ghost tables. In addition, the client is responsive: reducing the window width will make the view-pane narrower until the media queries get applied.

Zoom Email Client blocks images by default. Automatic download of external content (images, css) can be activated as a general setting but not per email or sender.

Images are replaced by blue placeholders, giving the email a nicer appearance than many other email clients which just replace them with a box and/or a red icon. Since the placeholder is nearly square shaped, it might slightly affect the layout under some circumstances.
For background images no placeholder is displayed, so make sure to define a background color as fall back.

Good news for email designers: Zoom does not invert colors! 🥳
(sorry to all the night owls 🦉 among us, not inverting email clients cause significantly less headache)

The Zoom app supports dark mode either inherited from the system settings or as an app-specific setting. However, the email client remains in light mode in any case.

Support for advanced elements is surprisingly good and nearly on par with Apple Mail:

During our testing, we also noted things that didn’t have support or caused issues:

The Zoom email client does not provide a “read this email” option, nor does it offers a zoomed view of the email.

Zoom seems support interactive elements at least partially. Input, sibling/neighbour operators are taking effect at least in certain cases. But unfortunately not in any case. We are still investigating and will update the blog here once we get clarification.

We also ran simple tests with a four tabbed block, which worked perfectly and correctly swapped between tab content blocks and a CSS toggle which correctly transitioned between the two modes.